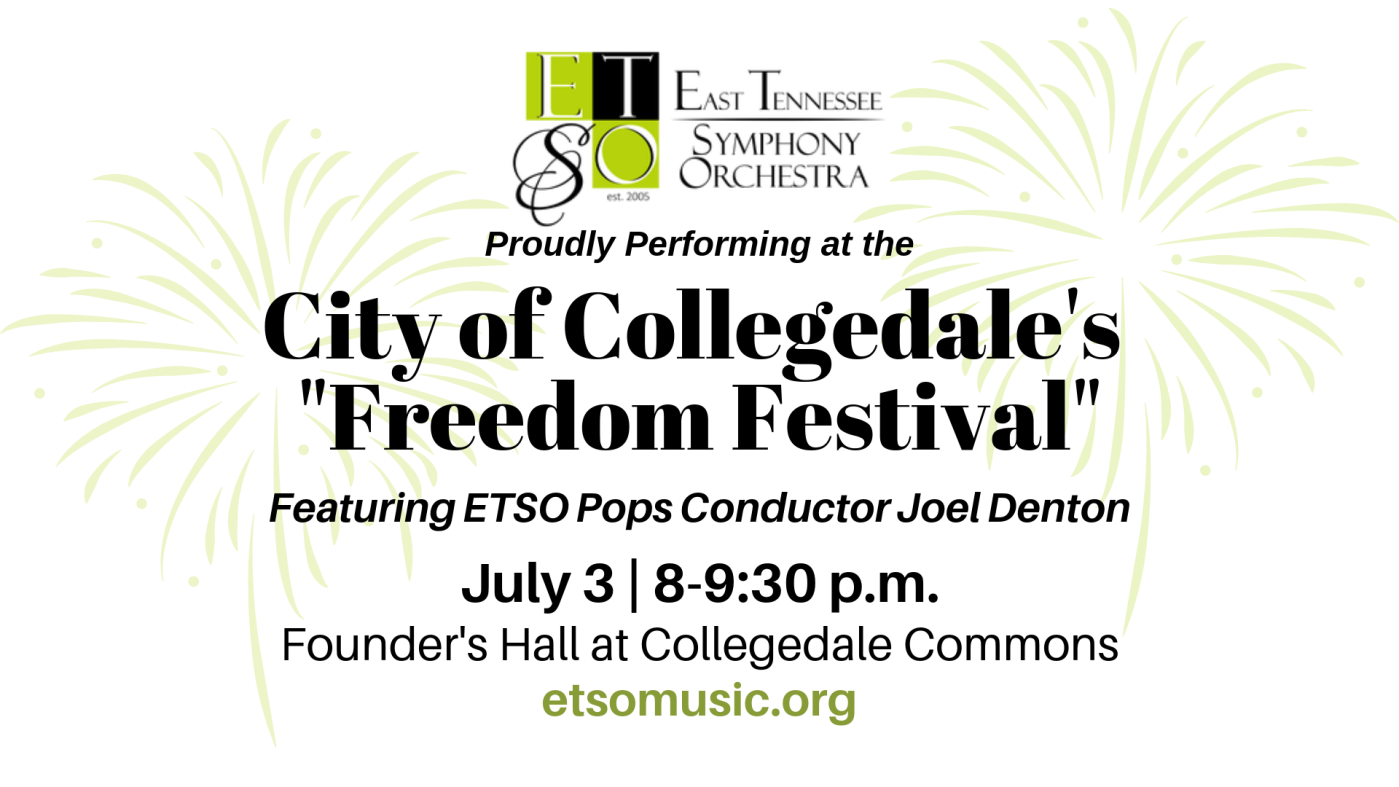 The ETSO is proud to announce retired long-time band director Joel Denton as ETSO Pops Conductor during the City of Collegedale’s Freedom Festival on July 3. The annual celebration begins at 8 p.m. and will move from its former location at Veterans Park to the Founders Hall at the Collegedale Commons on Swinyar Drive in Collegedale. The family-friendly event is free and open to the public. Concert times are subject to change. (Visit etsomusic.org for updates.)

“We are excited and honored to take part in this year’s annual Collegedale Freedom Festival,” says Mathew Miller, executive director of the ETSO. “We’re expecting another record crowd. It will be another great, patriotic day for the community to come together with family and friends and celebrate our individual freedoms and all of the other great aspects that are uniquely wonderful about this great nation.”

This year, the ETSO is honored to have veteran band director Joel Denton as its Pops Conductor of the orchestra. Denton served as Director of Bands at Ooltewah High School for 37 years. The University of Tennessee at Chattanooga graduate was most recently recognized as CMA Music Teacher of Excellence in 2018. His accomplishments include leading the OHS Band to national stage during the Macy’s Day Parade in 2007 and 2013, the Disney Christmas Parade in 2011, and the Tournament of Roses Parade in 2017.

Denton currently serves as the Tennessee State Chair for the National Band Association and is a former president of the Tennessee Bandmasters Association. He is a member of several music organizations and has received several honors, including his three-time recognition by the Tennessee Governor’s School for the Arts.

The retired band director says he looks forward to guest conducting for the July 3 concert, as well as the ETSO’s Christmas concert in fall 2019 (dates and times to be announced).

“The orchestra’s camaraderie and the sense of commitment to community and musical excellence is truly special,” Denton says. “I am so incredibly honored for the invitation to serve the ETSO.”

He lives in Chattanooga with his wife of 34 years, Kerry, and they have two adult children.

FOR EVENT UPDATES: Follow the ETSO on Facebook for news on delays and postponements in the event of schedule changes and inclement weather on July 3.

Learn more about how ETSO brings symphonic music to the community.